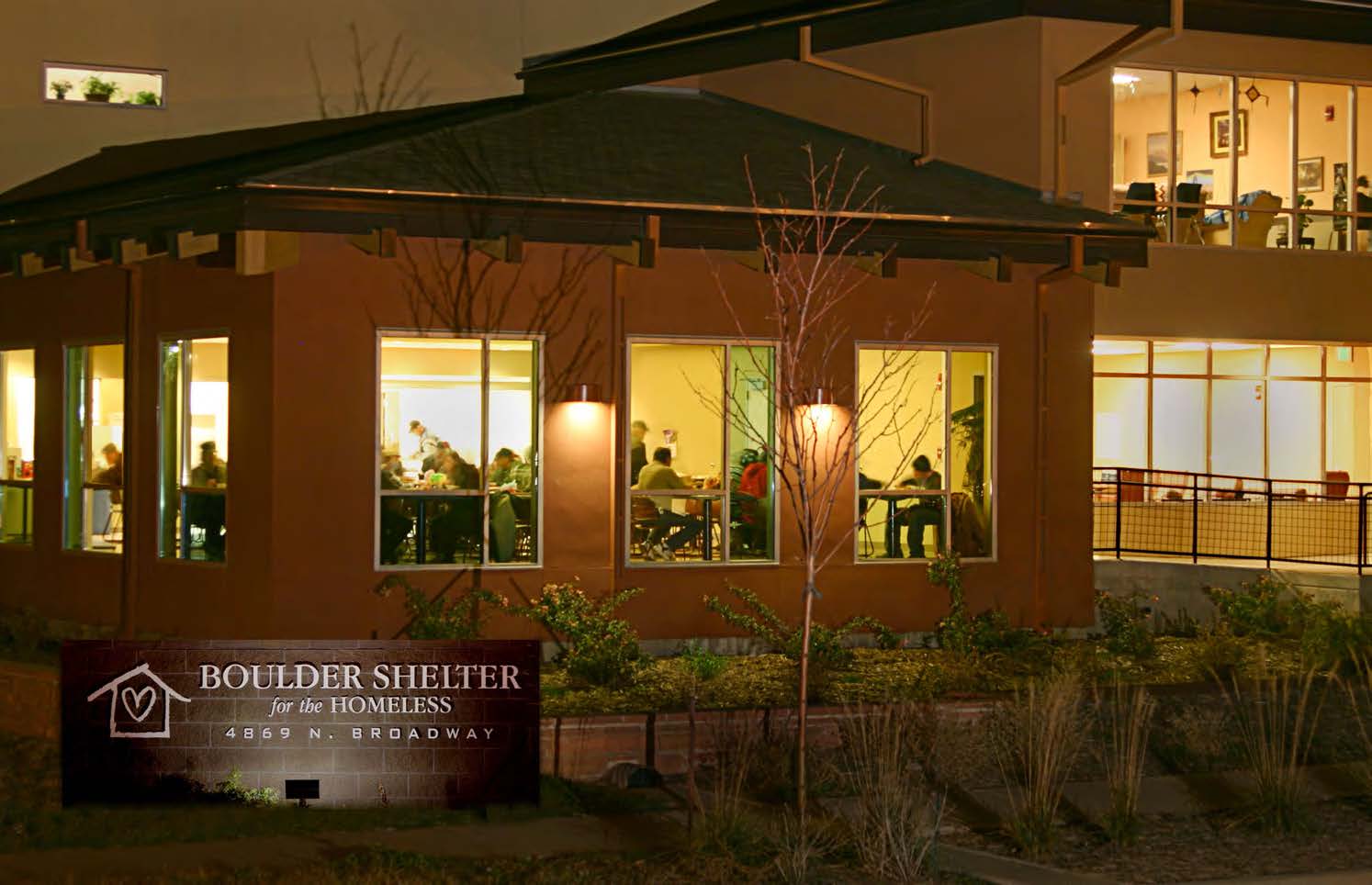 Boulder Shelter for the Homeless

Description  31,858 sf structure utilizing minimal operational and life cycle costs through roof-mounted solar panels and a geo-exchange mechanical system, located on a 51,518 sf site. The building incorporated men’s and women’s emergency/overnight sheltering, as well as transitional (longer term) lodging to allow clients in recovery to work on re-integrating productively back into society.  The program also incorporated a commercial kitchen, dining area, laundry, workforce development training area, and outdoor space that incorporated recreation and gardening. The initial capital site and building construction costs for the Shelter’s budget were set at $4,145,000.   The final completion cost for the project was $20,000 under the Guaranteed Maximum Price.

Design Goal  The primary goal for the Shelter project was to create a welcoming, safe, and empowering environment, where residents would have the support system they need to return to self-sufficiency.  Central to every design decision was, of course, the very limited budget.

The design process began with an intensive search to find a location that best served the homeless population, as well as the surrounding community.  With the site selected, a committee of Shelter staff and neighborhood representatives was formed in order to address existing concerns and identify potential impacts.  The committee was able to develop mutually satisfactory solutions during the ‘good neighbor’ process.  Guidelines for future communication and dispute resolution were also discussed to ensure continued cooperation.

The final building design and spatial organization incorporated suggestions from both the ‘good neighbor’ process and from in-depth programming meetings with Shelter staff.  Increasing resident capacity from 84 to 160 and incorporating functions, previously off-site, required the new building be easily maintained with minimal operational and life cycle costs.

The shelter project illustrates a successful community-based process.  The process for siting, design and under budget construction of the new Shelter moved a community from a static position of intense neighborhood opposition to broad-based community support from neighbors, local regional and state stakeholders through volunteerism and financial support.

It was designed to provide services to meet the countywide need for the next 10-year period; at which time the surrounding communities could support their own homeless population.  The Shelter was created with enough space to provide shelter, food, medical services, life-skills training, counseling and other on-site support services for its residents. Due to the complex social and political impacts of the project, the design team worked closely with the city, county, state and local neighborhood representatives to successfully integrate the Shelter into the fabric of the local urban neighborhood.

Because of the collaboration between the Architect, Client, and the Community, the design of the Shelter achieved the client’s goals and exceeded their expectations.  Residents now have a place they can call ‘home’ even if it is only temporary.  The new Shelter provides a dignified place to stay with all the necessary support services to aid residents in getting back on their feet.

“The process of creating shelters for the homeless can become highly charged and divisive within a community. There is so much false and incendiary information surrounding the potential impacts to nearby properties. As a City Manager who has gone through the creation of or relocation of shelters in three communities, I am very familiar with the challenges. However, the facts reveal that well designed and operated shelters actually have virtually no impact upon adjoining properties and may even reduce impacts in other parts of the community because the assistance services of the facilities serve to mitigate them.”

“architectural manoeuvres worked constructively with funders and the Board of the Shelter for the Homeless to design a cost-effective facility that would serve the needs of the homeless community. The City of Boulder greatly appreciates architectural manoeuvres efforts to balance conflicting objectives. The result is a well designed Shelter that will provide sustainable community benefit to Boulder.” 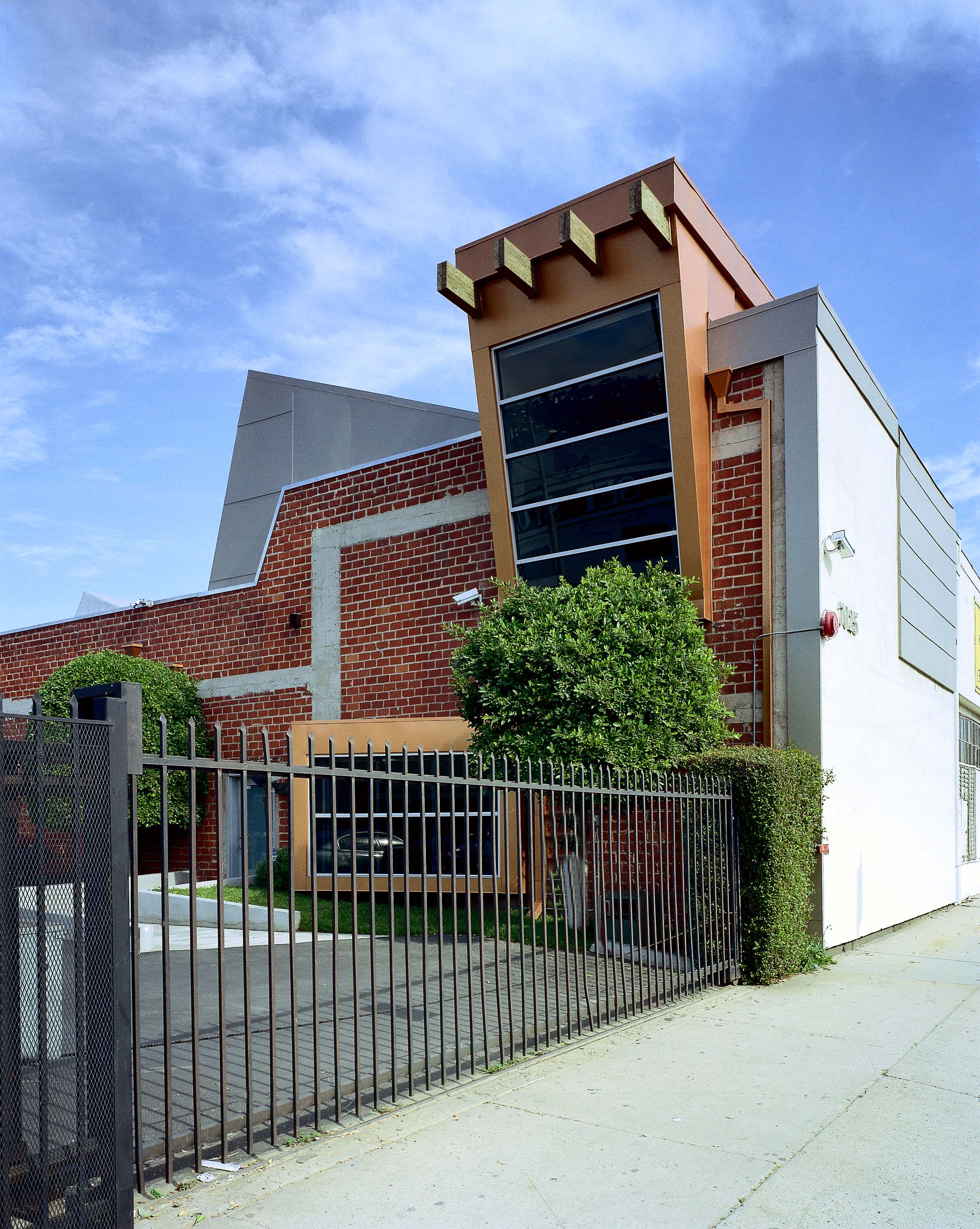 Description  Renovation and addition to an existing 1930s glass blowing factory, located on Santa Monica Blvd, near the famous Formosa Café.  The renovation included the addition of a second story office space for Michael Piller, producer and writer for the Paramount Pictures franchised Star Trek television shows and movies.

Design Goals  Recapture the vintage 1930s factory/warehouse aesthetic through the use of form and materiality.  Create a dynamic first floor conference space for video screening of current film and TV projects, and high-level meetings, create office spaces for the assembled writing team, and add a dynamic second story office for Michael, with flexibility for creative writing, screening, meeting and entertaining functions. 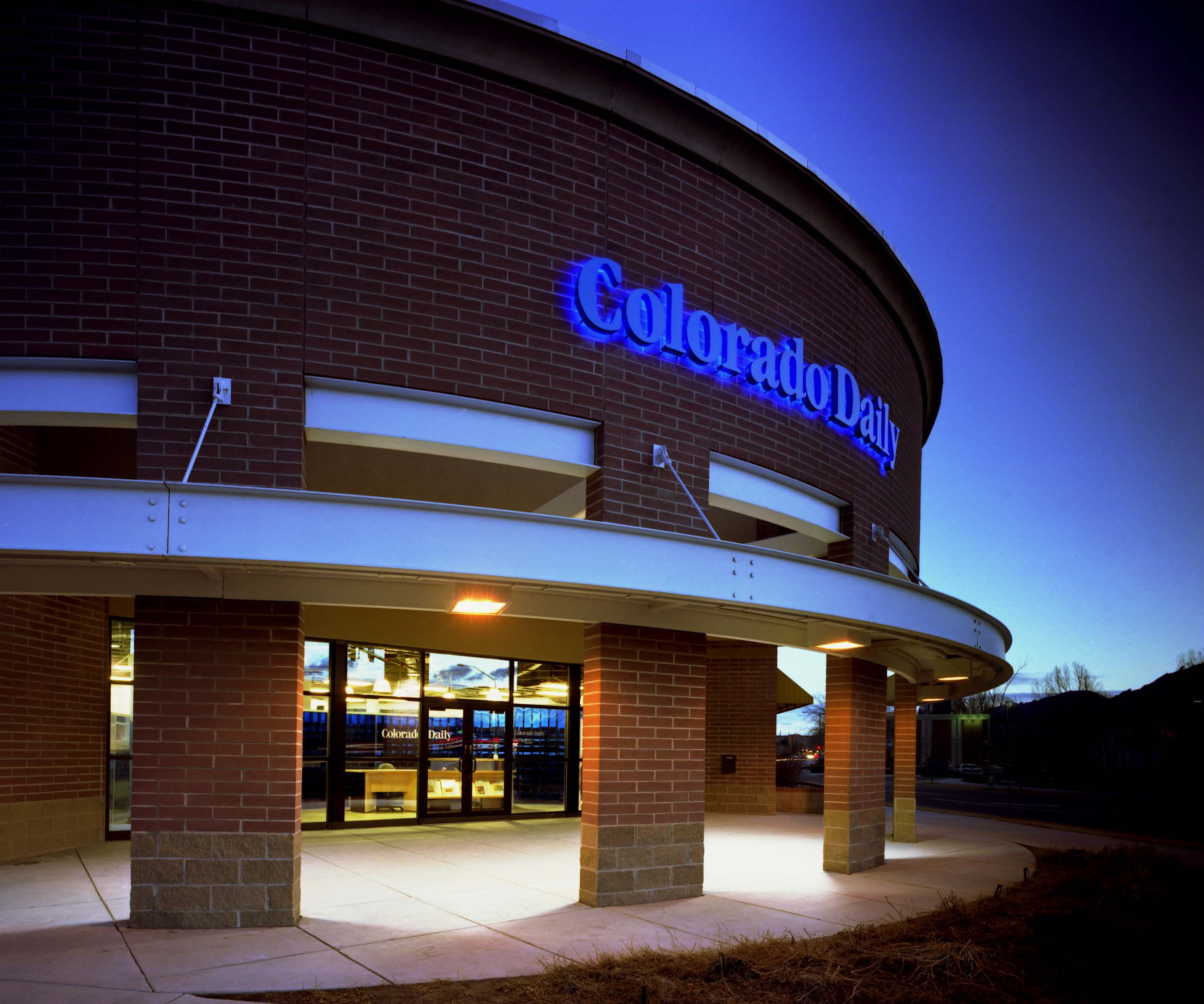 Description  Tenant Improvement. This renovation of a vacant commercial space allowed the relocation of the Colorado Daily Newspaper to occupy a more productive workspace.  Programming, design, construction documents, permitting and construction occurred in a fast-track process of six weeks total duration, allowing the Colorado Daily to put out their important Thanksgiving issue from their new space.

Design Goal  A tight budget encouraged the exploration of inexpensive construction methods and finish materials.  Translucent and blue polygal polycarbonate paneling allows light to flood the interior of reporters’ office and conference rooms, while maintaining noise privacy.  A ‘war table’ arrangement, from the earliest days of journalism, allow the newspaper’s editor and publisher to sit in the center space, surrounded by the heads of each of the paper’s divisions (news, entertainment, music, sports, food, etc.) to hash out the layout of each issue’s content.  Completed 1999. 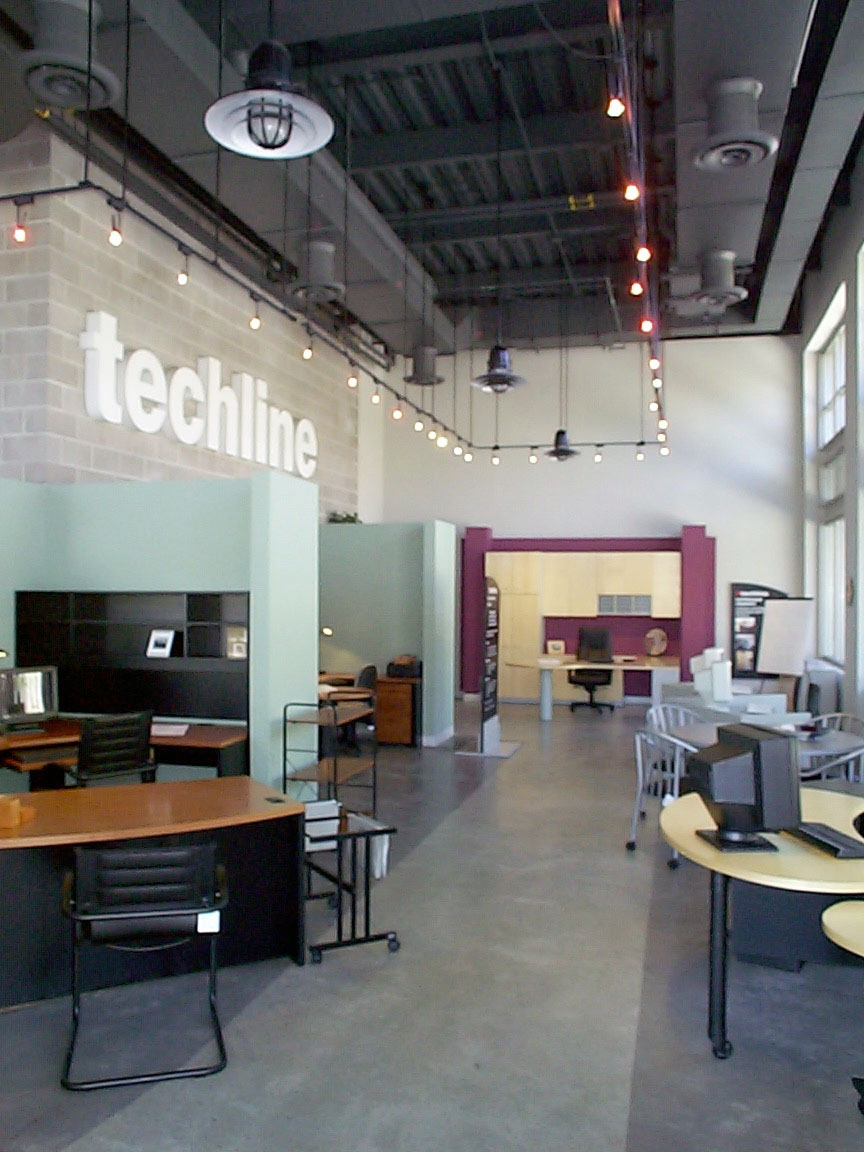 Description  Commercial Tenant Finish (Improvement) for a 2,607 sf retail office and home furnishings store located at the east end of the world-famous Pearl Street pedestrian mall and located on the southeast corner of 15th and Pearl.  Housed in the prime storefront frontage of the new City of Boulder owned parking structure, Techline experienced their most profitable year, after 25 years of business, upon moving into this new retail space.

Design Goals  The intention of the design was to create a cosmopolitan and industrial loft type atmosphere that would contrast with the architectural norm of Boulder’s historic commercial district.  The existing steel and concrete block structure of the parking garage was left uncovered and highlighted through the use of paint colors and surface for sign display.  Mechanical ductwork, electrical conduit and pendant lighting from above were left exposed to highlight the industrial nature of the space.  The furniture displays were organized to allow a customer to move on a self-guided tour of the inventory.  This walk through was further reinforced by the creation of ‘walkways’ in the existing concrete slab.  The concrete slab was sand and pebble blasted to create textured walk areas.
Completed 2001 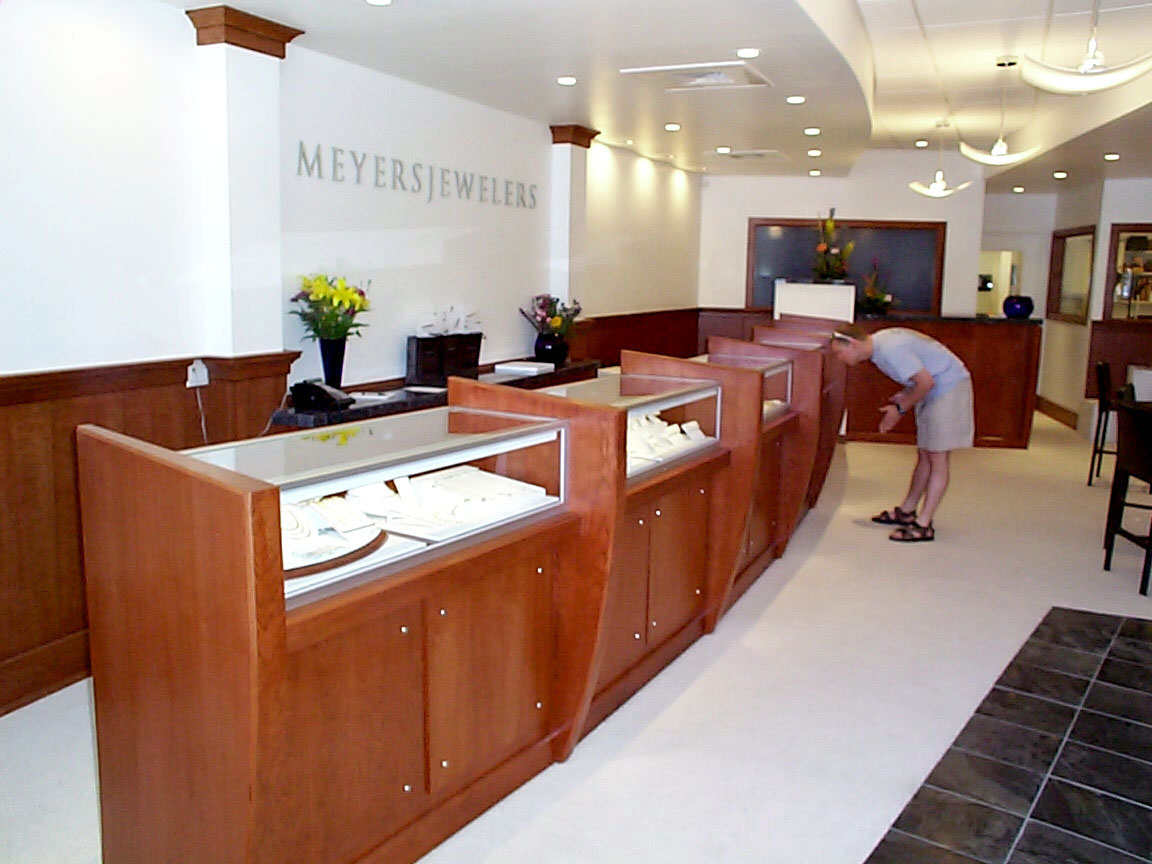 Description  Commercial Tenant Finish (Improvement) of a 1200 sf retail jewelry store adjacent to renowned McGuckin Hardware.  Meyers is a landmark Boulder business founded by Irv Meyers.  Irv recently celebrated his 50th year in business and upon moving into this newly designed retail space experienced his most profitable business year ever.

Design Goal  The intention of the design was to create a timeless retail jewelry space in the tradition of Tiffany’s through the use of interior materials and organization of the display area.  Classic, yet modern, Cherry display cabinets with frameless glass tops are lit from within by optic fiber lighting.  Black granite tops, cherry wood wainscoting and bush-hammered ostrich granite flooring bring warmth and elegance to the horizontal counter and floor surfaces and serve to provide a visual break to the hand-rubbed plaster walls.  Cherry wood display cabinets at the storefront window area are suspended with stainless steel cables and inset into the stucco storefront wall to mimic precious jewel boxes and engage the passerby and entice them into the store.

Like a Master Chef in an acclaimed upscale restaurant, Master Jeweler Irv Meyers, is put on display at his jeweler’s bench through a large picture window at the rear of the retail space.  Jewelry display cases and a dropped soffit ceiling above are gently rounded in form to further draw customers to the rear of the store, increasing the likelihood of a sale.   Completed 2000. 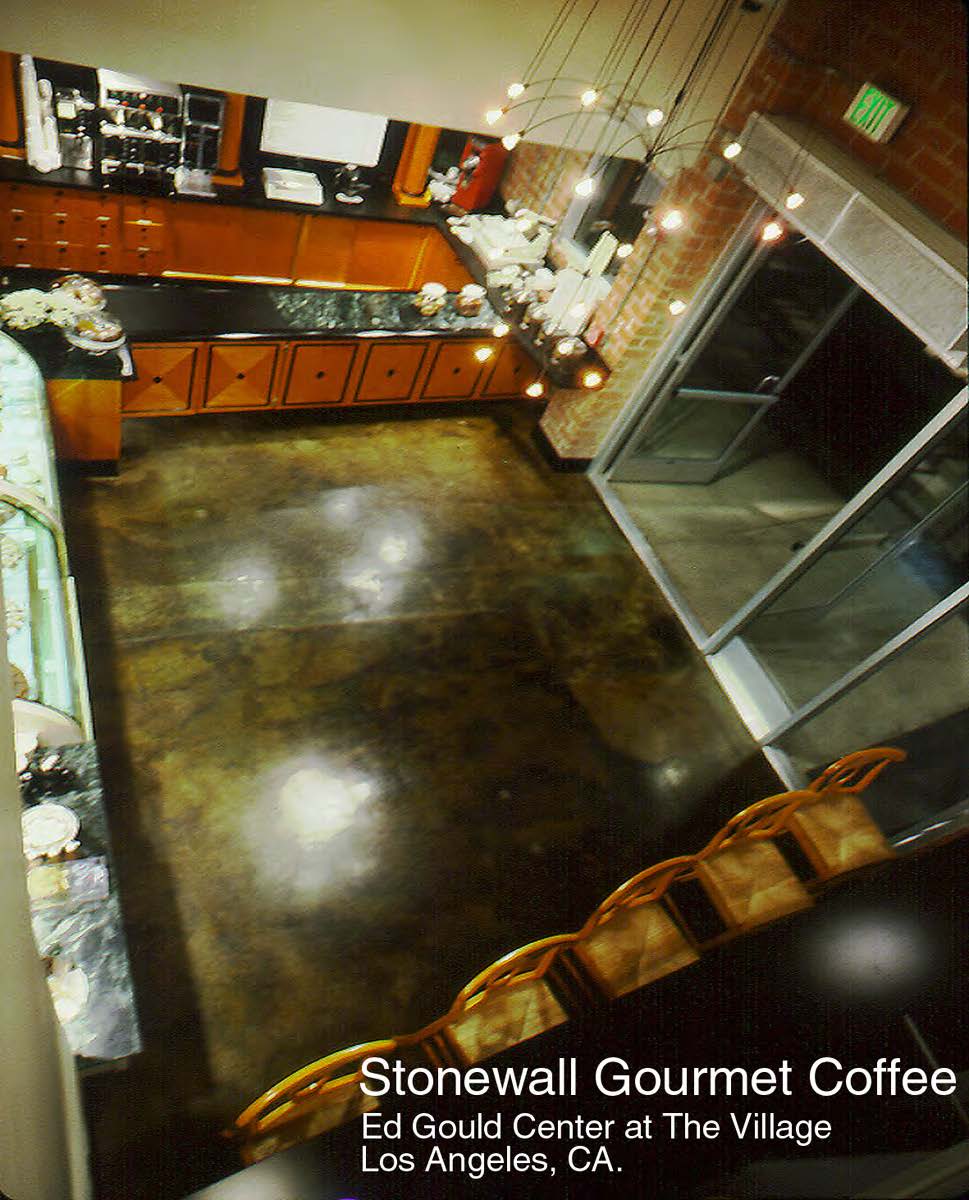 DESCRIPTION  Built in 1998, at the same time the Ed Gould Plaza was constructed, Stonewall was programmed to provide a gathering spot for the LGBT Community and the patrons of the Ed Gould Plaza.  Serving in-house roasted coffee, Stonewall became the heart of the center.

DESIGN GOALS  Match the quality of the architecture with the quality of the coffee, water and fudge that has made Stonewall famous.   Created an Italianesque coffee shop in the heart of Los Angeles by using warm stains on deep woods and seating that overflows onto the street, this shop recaptures the essence of community life.  Completed 1998. 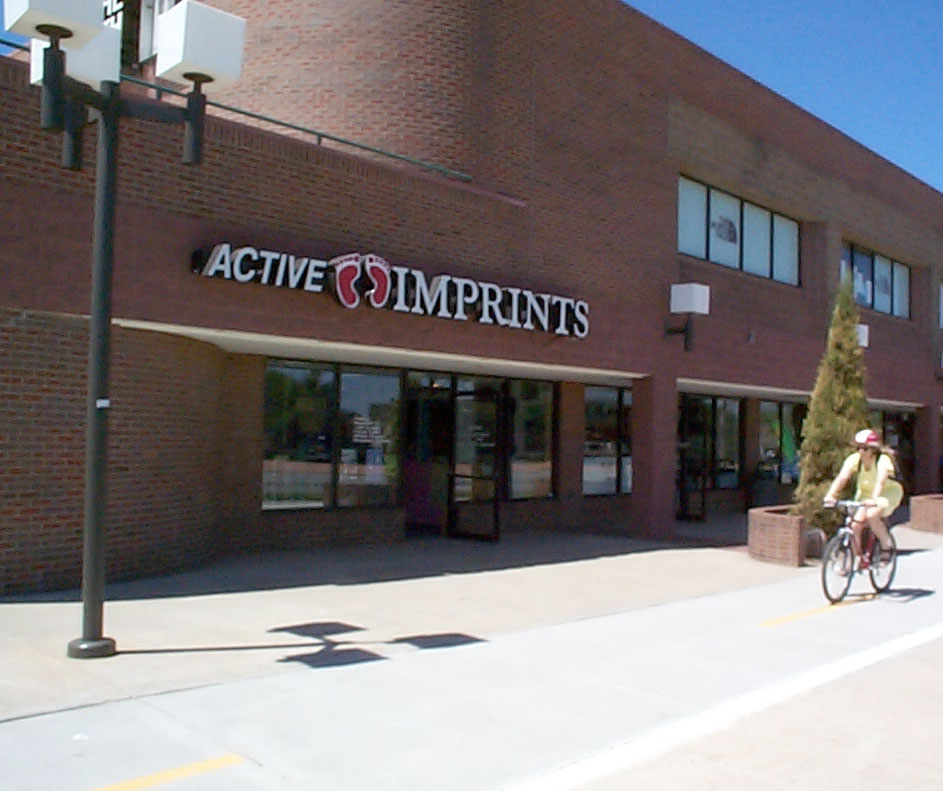 Design Goal  Create interactive process between orthotics lab and running store to allow clients to watch their orthotics being made in real time.  Sculptural shoe wall
displays offerings and offers separation from the store manager’s office and shoe storage beyond.  Completed 1991.